Brahms: Variations on a Theme by Haydn, Op. 56a 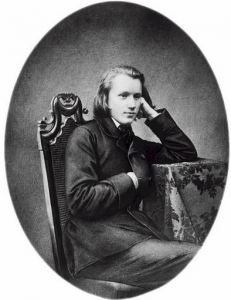 Brahms wrote two versions of this Variation on a Theme by Haydn, one for orchestra, Ops. 56a, and one for two pianos, Ops. 56b, despite that it was actually composed first. This orchestral work is considered an important milestone marking the maturity and mastery of Brahms’s symphonic composition, along his other major orchestral works such as Piano Concerto No. 1 in D minor Ops.15, as well as the orchestral part of his German Reqium Ops.45. Throughout his thirties and forties Brahms honed his orchestral composition crafts, while contemplating on making his breakthrough to become a symphonist. Three years later he produced his First Symphony in C minor.

If I were to pick one word to describe how I feel when listening to this work, it would be magnificent. The main theme is extremely simple, presented entirely by woodwinds and led by oboe; its neatly structured phrases give us a sense of calm and elegance:

Yale professor Craig Wright describes this 10-measure theme as the 5-bar antecedent followed by the consequent phrase in same length; it’s then repeated, and followed by another repeating section of extension phrase plus consequent, like this: ||:AC:||:EC:||[1].

The violin takes on a flowing melody growing out of the main theme, with smoother eighth notes moving up and down the scale, walking away from the stepwise stability on the main theme:

The tempo is faster and the mood stirs a bit more turmoil with that heavy accent on the first beat of every phrase:

Back to a flowing eighth-note melody, this time led by woodwinds:

First variation to use a triple meter, played on minor key, first by woodwinds then lower strings; the slower melody is warm but a bit gloomy:

The opening phrase sounds like hunting progression, appropriately played out by the horns; the extension almost sounds like a celebration fanfare played in full force by the whole orchestra:

Back on triple meter, the melody is relaxed and pleasant; here Brahms plays his favorite rhythm game of 2-over-3 cross rhythm in the later phrase toward the end:

Very light and mysterious, mostly played by the winds:

The key point of the finale is that it is a passacaglia, of totally 17 variations on a five-measure ground base. Here is the opening five bars, with the ground base starting on the lower strings, while violins follow one measure behind:

In Malcolm MacDonald account, the 17 variations “process in an increasingly magnificent parade of seamless invention around this thematic core, climaxing in a grand clinching statement of the tune from which Brahms has derived so much inspiration”[2]. Just listen to this part where string’s powerful downward eighth notes pounding on top of the base procession:

The “seamlessness” is evident then the ground base is gradually elevated to higher register, becoming more prominent and eventually lead to the full orchestra’s triumphant reprise of the main theme:

This entry was posted in Orchestral. Bookmark the permalink.

2 Responses to Brahms: Variations on a Theme by Haydn, Op. 56a